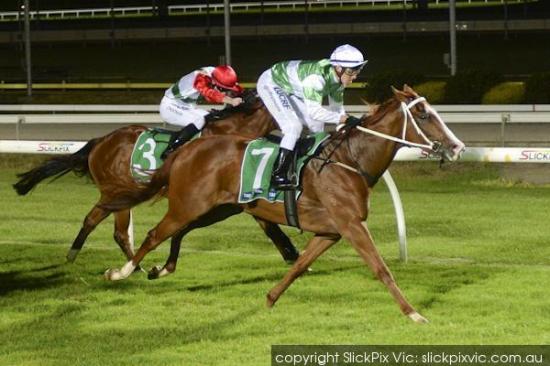 A well-timed change of tactics led to a deserved win for talented galloper The Blonde Alibi in the Browns Sawdust & Shavings Handicap (1000m) at Cranbourne.

The Blonde Alibi led without success at her previous run at Yarra Valley but trainer Shane Stockdale and jockey Chris Symons decided the make-up of the Cranbourne field convinced them to let the mare settle behind the speed.

The result was an emphatic victory to The Blonde Alibi after the experienced Symons gave the daughter of Ad Valorem a comfortable run behind the leaders with the aid of barrier one.

Jake Noonan sent his mount, the eventual runner-up Return Journey, to a good lead early in the straight but The Blonde Alibi motored home to score what turned out to be a soft win.

“We knew there was good pace in this race,” Symons said.

“From barrier one, we just wanted to take a sit and give her something to finish off with. She really surprised me.

“Jake (Noonan) kicked at the top of the straight and  I thought I was no hope of running him down but the leader just started walking and she started getting into gear and finished off really well.”

Stockdale said the race went exactly as planned for The Blonde Alibi, who has won two of her six starts.

“It was good to see her get a sit and finish off,” Stockdale said.

“We thought there would be plenty of pace so we told Chris to get the drop on them if he could and come over the top. It worked out well.”

The Blonde Alibi earned a $10,500 winner’s cheque for her impressive Cranbourne success, taking her earnings to more than $23,000.