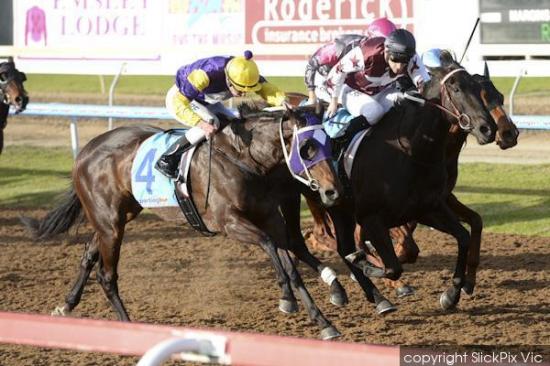 July 25 continued to be a profitable date for game mare Star Impulse after the four-year-old scored a last-stride win on the Geelong Synthetic track.

Star Impulse won on heavy ground at Bendigo on the corresponding date last year before she broke an 11-month drought with her terrific win.

Star Impulse had turned in solid seconds at her past two runs on the Geelong Synthetic track before tackling Benchmark 64 company in the Market Square Shopping Centre Handicap (1300m).

Trainer Shane Stockdale preferred not to use a claiming apprentice to ride Star Impulse despite her 60kg handicap, booking Cox Plate-winning jockey Steven Arnold to ride the mare.

A moderate beginning left Star Impulse well back in the field for most of the $17,500 contest but a decent speed kept her in contention for the first half of the event.

Star Impulse was held up approaching the home turn and again at the 200 metres before Arnold eased her into clear running halfway down the straight.

The Clangalang mare showed impressive acceleration to dash home late under her big weight, getting her head down at the right moment to enable her to win narrowly.

Congratulations to Star Impulse’s owners on their latest success with their honest mare.