The Blonde Alibi back to best at Hamilton 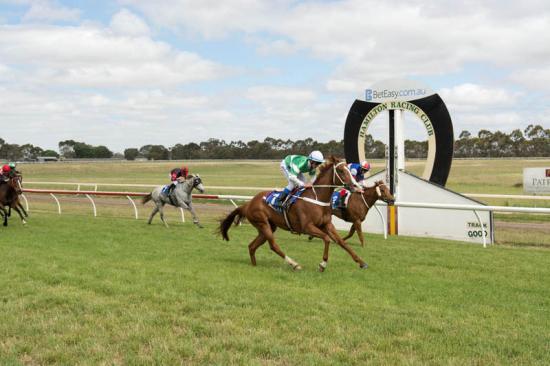 The Blonde Alibi’s determination and a brave Brandon Stockdale ride combined to get the mare back to winning form at Hamilton.

The Blonde Alibi had not won since December last year but showed signs she was on the way to her best form with solid efforts at Sale and Kyneton before her Hamilton outing.

Barrier nine initially proved a problem for the young jockey as The Blonde Alibi was caught three-wide but Stockdale decided to send her forward.

Stockdale took the initiative to lead on The Blonde Alibi at the 600m but the unusual way the race panned out had little effect on the five-year-old’s chances.

The Blonde Alibi entered the straight clear of her opposition but the runner-up Canyoukeepasecret threatened to overhaul her in the final 200m.

However The Blonde Alibi powered away late, despite drifting to the centre of the track, to score by 1-¼ lengths in a gritty performance.

The Blonde Alibi’s bravery earned connections a $9000 winner’s cheque, which pushed her stakes tally to more than $39,000.